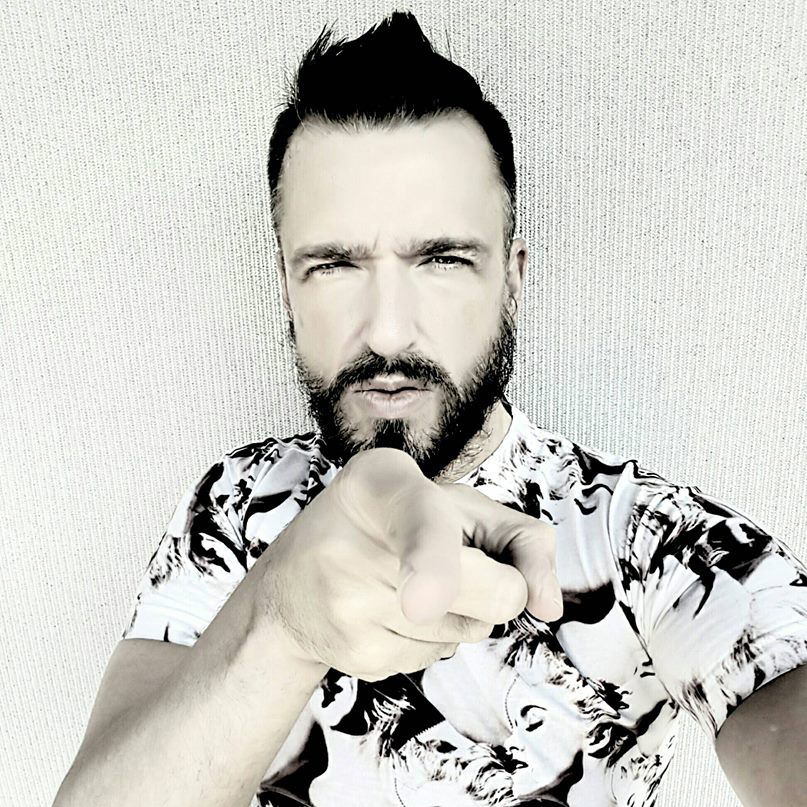 The bottom fell out of my musical sky in 1999 when my good friend DJ Tracy Young began encouraging me to follow suit in my passion for dance music which I had since childhood. It wasn’t until 2007 when she asked me what I was doing with it, I realized that I had become complacent just making the odd podcasts here and there that I had done for years. I re-evaluated what I was doing and where I wanted to be and decided the two pictures didn’t match. Over the past few years, I made it a priority to remix tracks instead of just doing sets which had been my forte for the previous 10 years. Soon I began producing tracks and realized that the passion was alive and well, bursting forth to be fulfilled. At this time I weighed 420 lbs and was socially isolated at home for the most part except for going to work and the movies. I decided it was time for a change and began to do weight training and changed my nutrition. Fast forward now to 2012…I had lost almost 200 lbs by the close of the year and my first track went viral, eventually being snipped by Soundcloud due to WMG, a remix of Madonna’s “Thief of Hearts”. Since then I have also produced a remix for “Vogue” which I did not realize had become popular til I heard it in a bar in Fort Lauderdale while on vacation for New Year Eve at the closing of 2012. 230 lbs and many mixes later, 2013 and 2014 have taken off like no other time for me.

I thought that my favorite gay social app, Scruff, needed a track of its own after hearing the spoof tracks about Grindr. I created an original track backed with mashups of other songs to create “Nasty Boys (Scruff)” for the official Scruff party in Atlanta on 4/12/13. It was soon embraced by the app’s founder, Johnny Skandros posting the track on social networking sites. Special thanks to my good friend, Pollo Del Mar, a famous San Francisco nightlife personality for jumping on board last minute to do some raw, campy fun vocals for it. I’m currently in the process of redoing the track as a completely original production as a 2014 Anthem with Pollo Del Mar. Over the course of the last 2 years, I’ve officially remixed tracks for Manila Luzon, A.D. Delory, Frisky Monkey, Levi Kreis, and Ernest Kohl. I also honored late last year to remix a dub for Cher.

When I started wanting to remix, I will never forget my wonderful friend, DJ Robbie Martin, actually filming instructional videos for me on how to use Ableton Live to mix tracks such as mashups. I still have those videos, Robbie! It meant a lot for him to take time to show me how to do that when he was burdened with work, DJ gigs, and such a full social plate at that time. He shares my passion for music but also has a big heart and has been there for me in much personal crisis for which I know I can never repay him. Very grateful we are still friends through this journey.

I sent some of my material to my friends, Tracy Young and Niki Haris (former Madonna singer/dancer for 18 years). After sending my Mariah Carey dub mix of “Emotions” to Tracy, she simply replied “Love it Bill”, which was enough to make me teary-eyed with surreal gratitude of where I am right now. Likewise, Niki sent me an email, “…I’m so proud of you baby!!” when I told her about mixing the Levi Kreis single, “Gonna Be Alright”. Just a few months ago I put Niki in touch with John LePage, a friend, and colleague in San Francisco, to record a track called, “Not Enough”. This cover song recently made it to #24 on the Billboard Club Play chart and I was thrilled to be one of the remixers on the project, mixing someone that I consider to be a member of my family at this point. I also interned for Wilson Phillips while in college in 1990 and it all came full circle when I remixed “California Dreamin'” 22 years later (2012) and am set to remix their track “Wouldn’t It Be Nice”. I believe there are no coincidences in life and I’m very blessed to be where I am.

The first original track that I co-wrote with my good friend and manager, Charlie Harding, called “Sex on the Dance Floor” was recorded. We plan on reshooting the music video as well which was delayed due to technical reasons with the cinematographer. As an ASCAP registered writer and publisher, I plan on writing and producing many future original tracks as well as collaborations with other artists, plus continuing to remix, release podcasts and make a difference in this world through my music. I’m now setting the stage for my next area of conquest which is live DJ’ing. I can’t wait to continue to broaden my artistic and creative horizons while sharing it with the world. Thank you for allowing me to do this. I am forever humble and grateful.