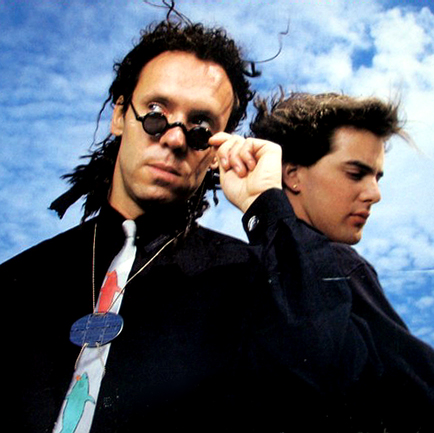 Kon Kan is a Canadian synthpop project conceived and formed in 1988 by Barry Harris in Toronto, Ontario. Kon Kan, featuring vocalist Kevin Wynne, were awarded a 1990 Juno for the song “I Beg Your Pardon” and nominated for a 1991 Juno Award for the single “Puss N’ Boots/These Boots Are Made for Walkin‘“.

“I Beg Your Pardon”

“I Beg Your Pardon” was inspired in part by both the Pet Shop Boys hit single “Always on My Mind” and an increasingly prevalent use of sampling by artists such as Public Enemy, M/A/R/R/S and Coldcut. The track sampled Lynn Anderson‘s 1971 hit “(I Never Promised You a) Rose Garden“, Silver Convention‘s 1976 hit “Get Up and Boogie (That’s Right)”, GQ‘s “Disco Nights (Rock-Freak)“, Tones on Tail‘s “Go!”, Spagna‘s “Call Me“, as well as the opening bars from the theme music from The Magnificent Seven(which was also well known as the theme to a commercial for Marlboro cigarettes in the 1960s).

It was recorded part-time during weekends in a home basement midi studio in Hamilton, Ontario, in March, April and May of 1988. It was here that Barry Harris met Kevin Wynne, who was hired to sing the song’s verses. The resulting single was originally released in June 1988 on (now defunct) indie label Revolving Records, in Toronto.

A New York-based Atlantic Records employee (and radio promoter) named Marc Nathan, who was on vacation in Toronto, heard “I Beg Your Pardon” in a dance club, where Barry Harris happened to be DJing. Nathan bought several copies of the single from a record store around the corner from the club and took them back to New York. The single was sent to four radio stations and was received particularly enthusiastically in Houston.

By fall of 1989, Kon Kan were signed by Atlantic Records, and marketed as a duo. “I Beg Your Pardon”, eventually re-released in the spring of 1989, was a worldwide hit, and reached the Top 5 in several countries (including the UK) and the Billboard Top 20 in the US. The song earned Kon Kan a Juno Award for Best Dance Recording in 1990.

Kon Kan’s debut album, Move to Move, was recorded in Los Angeles in January and February 1989. As well as “I Beg Your Pardon”, it also spawned the singles, “Harry Houdini“, “Move to Move” and another original/cover combination, “Puss N’ Boots“. The latter track included recreations (rather than samples) of Led Zeppelin‘s “Immigrant Song” and Nancy Sinatra‘s “These Boots Are Made for Walkin‘“.

The album also featured collaborations with Bob Mitchell (who had co-written Cheap Trick‘s number one hit, “The Flame“), Jon Lind (co-writer of Madonna‘s “Crazy For You“) and Dennis Matkosky. The album also featured a cover version of the smash hit “Bite the Bullet” by fellow Canadian group They Never Sleep. The album was mixed by Alan Meyerson, currently a film score mixer. Kon Kan embarked on a world tour with backing vocalist Kim Esty and were particularly well received in South American and Asian territories.

Kevin Wynne, who sang on all but two tracks from Move to Move, left Kon Kan in 1989 and entered the club business. He is currently involved in graphic design and print. Wynne also recorded a Depeche Mode-inspired solo single in the 1990s called “Last Chance”, but this remains unreleased.

Kon Kan, now effectively a solo vehicle for Barry Harris, released their second album, Syntonic late 1990. Harris once again teamed up with several writers (including Bob Mitchell), fusing dance and pop tracks with original songs such as Jimmy Soul‘s “If You Wanna Be Happy” (on “(Could’ve Said) I Told You So”) and Canadian band Trooper‘s “We’re Here For A Good Time” (on “Time”). The album was produced by a number of established producers, including renowned disco producer John Luongo, who had also worked with Blancmange, and Martyn Phillips (who had produced The Beloved‘s Happiness album that year). Paul Robb of Information Society also produced a couple of tracks.

The album was preluded by the single “Liberty”, which featured vocals by Debbe Cole. At the time, Cole was a well established session vocalist, who is best known for her work on Malcolm McLaren‘s “Madam Butterfly”. Cole also provided backing vocals on the subsequent “Syntonic” tour. Another single, “(Could’ve Said) I Told You So” was also released.

Following the release of Syntonic, Kon Kan was dropped from Atlantic Records’ roster. Marc Nathan (who had been fired in April 1991 following an altercation with the record company’s president), stayed loyal to Barry Harris and, in his new role with the management company Between the Ears, helped to secure a new deal for Kon Kan with Hypnotic, a subsidiary of A&M Records.

The next album, Vida!… (Hypnotic Records), saw Harris resuming songwriting duties with Bob Mitchell and saw Kon Can expand to a 4-piece band. Alongside original songs such as the album’s lead single “Sinful Wishes”, was a remake of “Move to Move” and a cover of David Bowie‘s “Moonage Daydream“. The second single released from the album was “S.O.L.” (short for “shit outta luck”), a collaboration with Crash Morgan. The album was solely released in Canada, and Harris wound up the Kon Kan brand over the next few years.

In 1994, Harris re-recorded “I Beg Your Pardon” without any samples and re-recorded all the vocals. It was released as an EP double pack 12″ with various remixes on Hi-Bias Records in early 1994.

Harris went on to become one half of the remix production team Thunderpuss. Along with co-producer Chris Cox, Thunderpuss became, arguably, the most popular dance remix production duo in the United States ( from 1998-2003 ), producing more than 20 #1 hit remixes for the likes of Madonna, Whitney Houston, Jennifer Lopez, Mary J. Blige, Céline Dion, Cher, Janet Jackson, Spice Girls, Amber, Abigail and LeAnn Rimes, to name just a few.  Their first work together being a remix of Billie Myers‘ “Kiss the Rain” in 1998. Their breakout success was a hit re-working of “It’s Not Right but It’s Okay” by Whitney Houston. This was quickly followed by a remix of “Sexual (La Di Di)” by Amber, a hit in 1999 and their success soared as both remixers and artists.

In 2014, “I Beg Your Pardon” sees its 25th Anniversary,  and Harris’ Kon Kan is back with 2k14 remixes. To celebrate its 25th Anniversary, several record labels around the globe will be releasing 2k14 remixes over the course of several months, kicking off June 03, 2014 on Swishcraft Record’s “Swishcraft Pride 2014″ and followed by this EP of Remixes. Additional mixes on EPride Music and several more labels will join this release, including mixes by Edson Pride & Johnny Bass. The original video is also being cut to multiple remixes for VJ’s, with several mixes already available on the official Kon Kan YouTube page.