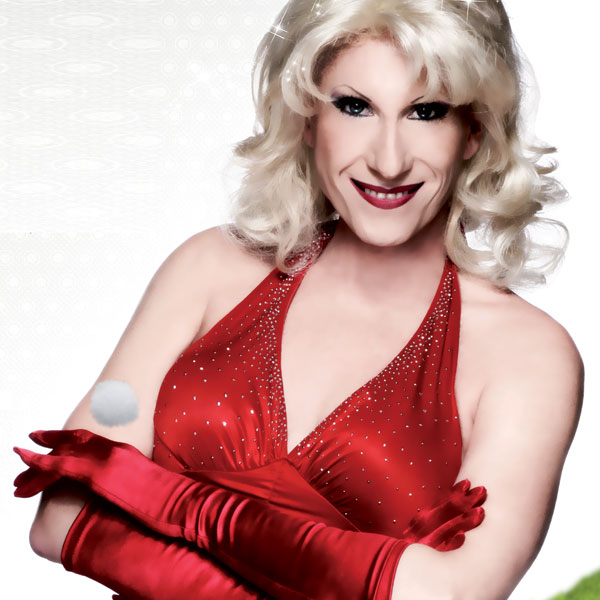 Twenty years ago, Donna Sachet started her adventure in San Francisco and the City has applauded her fun-loving spirit, quick wit, and musical talent ever since. She was selected Miss Gay SF in 1993 and reigned as the thirtieth elected Empress of SF in 1995-96.

Accolades have come her way from 4 San Francisco mayors, the City Board of Supervisors, the State Legislature, and the esteemed Herb Caen. She co-chaired the SF GLAAD Media Awards for 4 years and has served on the Board of Directors of Positive Resource Center, Imperial Council, SF LGBT Community Center, State Board of EqualityCalifornia, and the International Court Council. She is most proud of her annual Songs of the Season musical variety show benefiting the AIDS Emergency Fund for the past 18 years. Gary Virginia and Donna Sachet created the annual Pride Brunch, now in its 13th year, honoring the Grand Marshals of the Pride Parade and benefiting Positive Resource Center.

Donna has served as national spokesmodel for Smirnoff Twist Vodka, co-anchored the live television coverage of the June SF Pride Parade for 7 years, appeared on television’s Bay Area Backroads, served as the spokesmodel for Halloween in the Castro for 3 years, and co-hosted Comcast’s OUT Spoken television talk show for 5 years. She can be heard singing on the benefit holiday compilation Carols Across America. She was selected as a Community Grand Marshal for the 2005 SF Pride Parade and hosted cruises in 2007 with RSVP Vacations, including the historic all-Gay transatlantic crossing on the Queen Mary II. Donna was profiled in the Pink Section of the SF Chronicle on June 22, 2008, appearing on the cover of the section and on the front page of the Sunday Chronicle… above the fold! In 2010, she appeared on the cover of the SF Bay Guardian as a local hero. Donna Sachet has the distinction of being the first recorded drag personality to address the Commonwealth Club of California and the first to sing the National Anthem for a major league sports team at AT&T Park for the SF Giants.

Donna Sachet currently writes a biweekly column for the Bay Area Reporter, writes quarterly press releases about the LGBT Community for the SF Convention & Visitors Bureau, and stars in Sunday’s A Drag every Sunday at Harry Denton’s Starlight Room atop the Sir Francis Drake Hotel in Union Square.