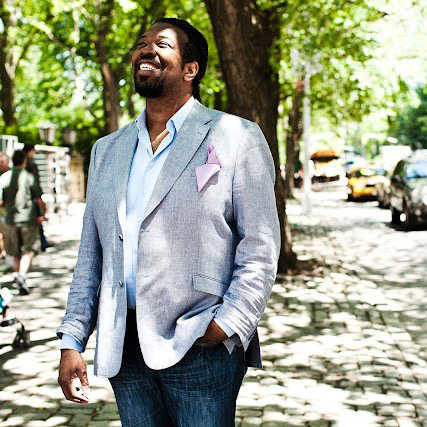 At six foot seven, DK Ibomeka (pronounced ee-bo-MECK-ah) has a towering stage presence and a voice to match. Musicians and industry insiders are calling DK Ibomeka one of the best new voices in years, with a three-octave range informed by the clarity and vibrancy of Ella Fitzgerald, the soulfulness of Ray Charles, and the deep, rich bass of Joe Williams.

The son of Nigerian immigrants to Canada, DK Ibomeka’s musical aspirations began when he thought he was heading for medical school. Moving into a new apartment he discovered that someone had left behind an Ella Fitzgerald CD. He blew off the dust, slipped the CD into his player and immediately fell in love. “I had always loved R&B,” says DK, “but when I heard the exquisite voice of this woman, it called to me in a way that no other voice has.” He spent the next few months singing in the shower, writing songs and not confiding to anyone his dream of becoming a performer. Eventually he broke the news to his parents that he wished to devote his life to music, and they asked him to audition right there in the kitchen, a capella. Amazed (they had no idea their son could sing), his parents agreed to support his decision. DK immediately signed up for studies at the Humber vocal jazz program and on weekends took advantage of as many open mike stages he could find. On the strength of his raw talent, he was offered a scholarship to the prestigious Berkeley School of Music, but unfortunately had to turn down this opportunity due to financial constraints.

Undeterred, DK pressed on singing wherever and to whomever he could. Never in his wildest dreams did he think that before long he would be co-writing songs with Haydain Neale, leader of Canada’s jacksoul – or that Haydain would want to produce his debut album. DK Ibomeka’s debut album “Love Stories”, presents a mix of classic jazz sounds combined with a touch of blues and a distinct flavouring of soul-informed jazz. “Love Stories” was produced by Haydain Neale (jacksoul), with legendary engineer and producer George Massenburg on board as mixing consultant, and was mastered in New York City by Ted Jensen at Sterling Sound. With each live performance (including an appearance at the 2005 Montreal Jazz Festival where he shared the stage with the Neville Brothers, Patti Labelle and Haydain Neale).

DK continues to captivate audiences and critics alike. In late 2006 ,Ibomeka completed a 20-date European tour, prompting MOJO, one of Britain’s most highly-regarded music magazines, to declare the artist’s song “Dedicated to You” from Love Stories as one of its top 10 best songs “on the box, at the movies, on album and on line right now.” According to MOJO, “The cream spills over on this version of a Billy Eckstein-Sarah Vaughn duet by a Canuck jazz/R+B singer with Nigerian roots.” In early 2007 DK received both a Canadian Smooth Jazz Awards nomination for Male Vocalist of the Year as well as a National Jazz Award nomination in the Best Male Vocal category. In May 2007 DK celebrated the release of “Love Stories” in France with two nights at the Jazz Club Lionel Hampton in Paris, where he was joined on stage by sax legend Pee Wee Ellis. After these dates, DK performed with the Diva Jazz Orchestra on a number of European dates before returning to Canada for a series of shows that will culminate with appearances at Canadian jazz festivals, including a return date at the Montreal International Jazz Fest.

In summer 2007, DK made his UK club debut with a three night engagement at Ronnie Scott’s Jazz Club in London. In the fall of 2007 DK began writing songs for his next album to be produced by Peter Cardinali and released in the spring of 2008. Touring during this period includes the Beantown Jazz Festival in Boston, and a European tour in October 18 to November 10 to include France, England and Germany. Details on www.dkibomeka.com