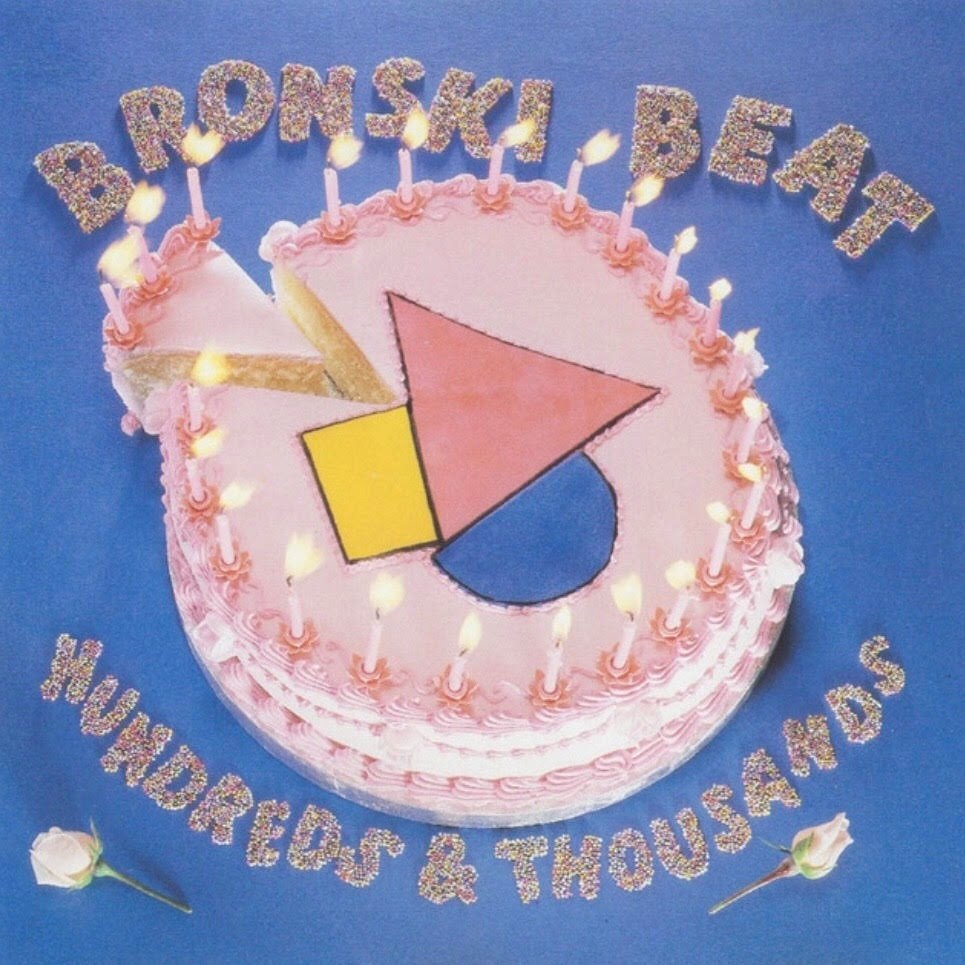 Bronski Beat was originally a British synthpop trio that achieved success in the mid-1980s, particularly with the 1984 chart hit “Smalltown Boy”, from their debut album The Age of Consent. All members of the band were openly gay and their songs reflected this, often containing political commentary on gay-related issues. The initial line-up, which recorded the majority of the band’s hits, consisted of Jimmy Somerville (vocals), Steve Bronski (born Steven William Forrest, keyboards, percussion), and Larry Steinbachek (keyboards, percussion).

Somerville left Bronski Beat in 1985 and went on to have success as the lead singer of the Communards and as a solo artist. He was replaced by vocalist John Foster, with whom the band continued to have hits in the UK and Europe through 1986. Foster left Bronski Beat after their second album, and the band used a series of vocalists before taking a long hiatus 1995. Larry Steinbachek died in 2016.

Steve Bronski, the only remaining original member, revived the band in 2016, recording new material with the 1990s members Ian Donaldson and Stephen Granville.

Ian Donaldson also separately works under the name Sordid Soundz as a London based Producer/DJ with releases on labels such as Spacedisco Records, Juiced Music, Krome Boulevard, Believe In Disco, Groovy Riddim, Jango, Onako Records, Bid Muzik, Vamos, Seventy Four, Bliss Unique, Tactical, Xamaky Records and many more. “Production-wise it’s all about house in its many forms but usually funky, intered and with a Jackin’ Disco vibe!

Bronski Beat formed in 1983 when Somerville, Bronski (both from Glasgow), and Steinbachek (from Southend) shared a three-bedroom flat at Lancaster House in Brixton. Steinbachek had heard Somerville singing during the making of Framed Youth: The Revenge of the Teenage Perverts and suggested they make some music. They first performed publicly at an arts festival in September in the Pink. The trio was unhappy with the inoffensive nature of contemporary gay performers and sought to be more outspoken and political.

Bronski Beat signed a recording contract with London Records in 1984 after doing only nine live gigs. The band’s debut single, “Smalltown Boy” (about a gay teenager leaving his family and fleeing his hometown) was a hit, peaking at No 3 in the UK Singles Chart, and topping charts in Belgium and the Netherlands. The single was accompanied by a promotional video directed by Bernard Rose, showing Somerville trying to befriend an attractive diver at a swimming pool, then being attacked by the diver’s homophobic associates, being returned to his family by the police and having to leave home. (The police officer was played by Colin Bell, then the marketing manager of London Records). “Smalltown Boy” reached 48 in the U.S. chart and peaked at 8 in Australia.

The follow-up single, “Why?”, adopted a Hi-NRG sound and was more lyrically focused on anti-gay prejudice. It also achieved Top 10 status in the UK, reaching, and was another Top 10 hit for the band in Australia, Switzerland, Germany, France, and the Netherlands.

At the end of 1984, the trio released an album titled The Age of Consent. The inner sleeve listed the varying ages of consent for consensual gay sex in different nations around the world. At the time, the age of consent for sexual acts between men in the UK was 21 compared with 16 for heterosexual acts, with several other countries having more liberal laws on gay sex. The album peaked at 4 in the UK Albums Chart 36 in the U.S., and 12 in Australia.

Around the same time, the band headlined “Pits and Perverts”, a concert at the Electric Ballroom in London to raise funds for the Lesbians and Gays Support the Miners campaign. This event is featured in the film Pride.

The third single, released before Christmas 1984, was a revival of “It Ain’t Necessarily So”, the George and Ira Gershwin classic (from Porgy and Bess). The song questions the accuracy of biblical tales. It also reached the UK Top 20.

In 1985, the trio joined up with Marc Almond to record a version of Donna Summer’s “I Feel Love”. The full version was actually a medley that also incorporated snippets of Summer’s “Love to Love You Baby” and John Leyton’s “Johnny Remember Me”. It was a big success, reaching 3 in the UK and equalling the chart achievement of “Smalltown Boy”.  Although the original had been one of Marc Almond’s all-time favorite songs, he had never read the lyrics and thus incorrectly sang “What’ll it be, what’ll it be, you and me” instead of “Falling free, falling free, falling free” on the finished record.

The band and their producer Mike Thorne had gone back into the studio in early 1985 to record a new single, “Run From Love”, and PolyGram (London Records’ parent company at that time) had pressed a number of promo singles and 12″ versions of the song and sent them to radio and record stores in the UK. However, the single was shelved as tensions in the band, both personal and political, resulted in Somerville leaving Bronski Beat in the summer of that year.

“Run From Love” was subsequently released in a remix form on the Bronski Beat album Hundreds & Thousands, a collection of mostly remixes (LP) and B-sides (as bonus tracks on the CD version) as well as the hit “I Feel Love”. Somerville went on to form The Communards with Richard Coles while the remaining members of Bronski Beat searched for a new vocalist.

Bronski Beat recruited John Foster as Somerville’s replacement (Foster is credited as “Jon Jon”). A single, “Hit That Perfect Beat”, was released in November 1985, reaching 3 in the UK. It repeated this success on the Australian chart and was also featured in the film Letter to Brezhnev. A second single, “C’mon C’mon”, also charted in the UK Top 20 and an album, Truthdare Doubledare, released in May 1986, peaked at 18. The film Parting Glances (1986) included Bronski Beat songs “Love and Money”, “Smalltown Boy” and “Why?”. During this period, the band teamed up with producer Mark Cunningham on the first-ever BBC Children In Need single, a cover of David Bowie’s “Heroes”, released in 1986 under the name of The County Line.

Foster left the band in 1987. Following Foster’s departure, Bronski Beat began work on their next album, Out and About. The tracks were recorded at Berry Street studios in London with engineer Brian Pugsley. Some of the song titles were “The Final Spin” and “Peace And Love”. The latter track featured Strawberry Switchblade vocalist Rose McDowall and appeared on several internet sites in 2006. One of the other songs from the project called “European Boy” was recorded in 1987 by disco group Splash. The lead singer of Splash was former Tight Fit singer Steve Grant. Steinbachek and Bronski toured extensively with the new material with positive reviews, however, the project was abandoned as the group was dropped by London Records. Also in 1987, Bronski Beat and Somerville performed at a reunion concert for “International AIDS Day”, supported by New Order, at the Brixton Academy, London.

In 1989, Jonathan Hellyer became lead singer, and the band extensively toured the U.S. and Europe with back-up vocalist Annie Conway. They achieved one minor hit with the song “Cha Cha Heels”, a one-off collaboration sung by American actress and singer Eartha Kitt, which peaked at 32 in the UK. The song was originally written for movie and recording star Divine, who was unable to record the song before his death in 1988. 1990–91 saw Bronski Beat release three further singles on the Zomba record label, “I’m Gonna Run Away”, “One More Chance” and “What More Can I Say”. The singles were produced by Mike Thorne.

Foster and Bronski Beat teamed up again in 1994, and released a techno “Tell Me Why ’94” and an acoustic “Smalltown Boy ’94” on the German record label, ZYX Music. The album Rainbow Nation was released the following year with Hellyer returning as lead vocalist, as Foster had dropped out of the project and Ian Donaldson was brought on board to do keyboards and programming. After a few years of touring, Bronski Beat then dissolved, with Steve Bronski going on to become a producer for other artists and Ian Donaldson becoming a successful DJ (Sordid Soundz). Larry Steinbachek became the musical director for Michael Laub’s theatre company, ‘Remote Control Productions’.

In 2007, Steve Bronski remixed the song “Stranger to None” by the UK alternative rock band, All Living Fear. Four different mixes were made, with one appearing on their retrospective album, Fifteen Years After. Bronski also remixed the track “Flowers in the Morning” by Northern Irish electronic band Electrobronze in 2007, changing the style of the song from classical to Hi-NRG disco.

In 2015, Steve Bronski teamed up as a one-off with Jessica James (aka Barbara Bush) and said that she reminded him of Divine, because of her look and Eartha Kitt-like sound. The one-off project was to cover the track he made in 1989.

In 2016, Steve Bronski again teamed up with Ian Donaldson, with the aim of bringing Bronski Beat back, enlisting a new singer, Stephen Granville. In 2017, the new Bronski Beat released a reworked version of “Age of Consent” entitled “Age of Reason”.

Out & About, the unreleased Bronski Beat album from 1987, was released digitally via Steve Bronski’s website. The album features the original tracks plus remixes by Bronski.

On 12 January 2017, Larry Steinbachek’s sister Louise Jones told BBC News he had died the previous month after a short battle with cancer, with his family and friends at his bedside. He was 56.